Roblox is something unique in today’s gaming. Really. This LEGO-styled rough graphics and amateur-styled gameplay conceal two of the greatest things that Roblox is here for. First, it’s a full-fledged lab for young (and not so young) developers. Its SDK is simple enough and lets users create their own games, as well as get rewarded. Second, it’s a social network with lots of things unified, from billing to avatars. It’s the perfect option for starting indie developers; some of them may go further after, some stay on Roblox.

There are also interesting secondary effects on Roblox. Say, visual limitations make the developers concentrate on gameplay. Thus we have sort of analog to Golden Age games, recompensing the limitations of hardware with inventiveness. And that’s why there are few analogs to Roblox, with its freedom to develop and share. But if we look a bit wider…

It’s the most obvious of all Roblox alternatives. And it’s about more than rough visuals and in-game shop for trading stuff. Now, as users can create their own mini-games within Minecraft, its similarity to Roblox only grows deeper.

Probably the main difference is about the building process. In Roblox games, a player can only act within the predefined world. In Minecraft, the gameplay suggests that the player should actively reform the terrain. And Roblox requires making a playable game or playing what others have made for you, while in Minecraft you can go Creative and simply build.

Still, these two have probably the most in common. If you like Minecraft, you can find lots of sun on Roblox (and on the contrary). Because both projects are for those who can feel the soul under the modest looks. 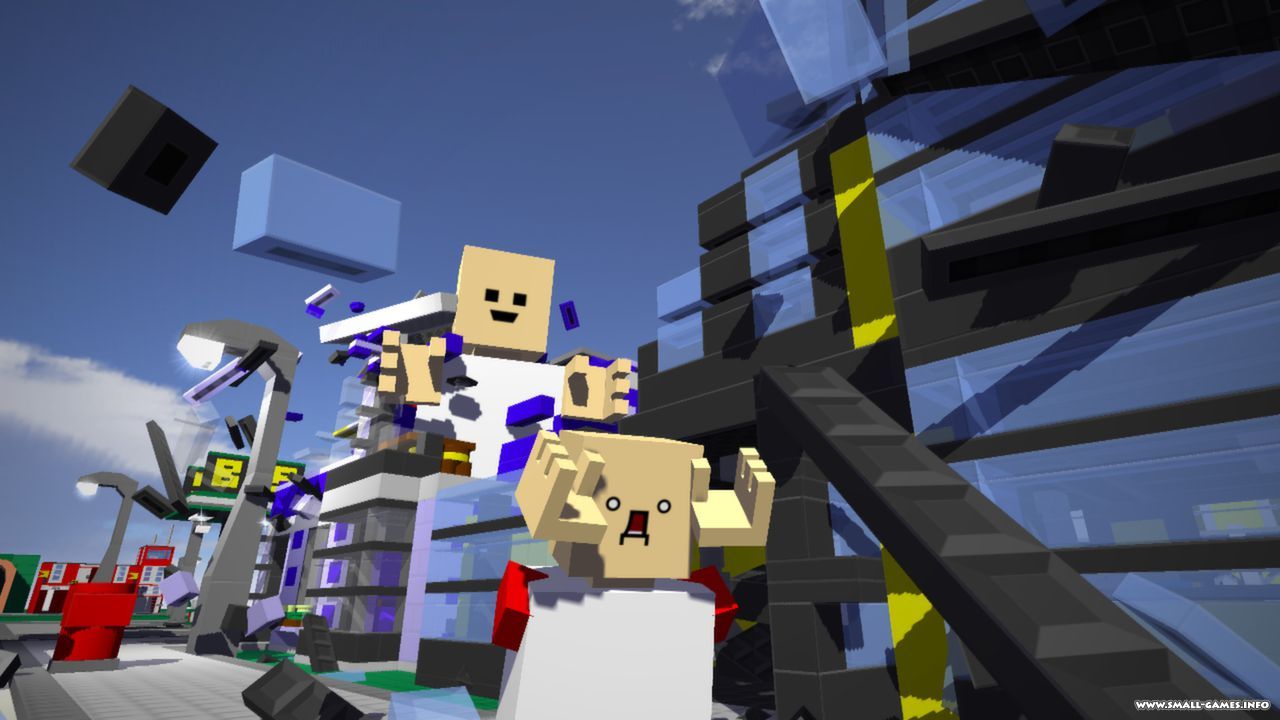 Probably it’s rather a Minecraft analog, concentrated on its Creative mode. It also features an open world with various sorts of blocks to build objects of. You need to encounter its physics (similar to real one) to prevent your buildings from falling down.

The game supports multiplayer mode, so collaboration can enrich your projects with new ideas and let you finish your construction faster. Of course, it lacks the popularity of Minecraft and the game-creating ability of Roblox. On the other hand, its distance from the mainstream may attract those into experimenting, and that’s who makes projects like this breathe.

This physical sandbox is probably the oldest of all listed, known since 2006. Garry’s Mod is based on popular engines by Valve – first on Source, then on its follow-up Orange Box (a more versatile version of Source). With it you can edit scenes and use objects and items from games like Half-Life 2, Counter Strike: Source, other games by Valve. It was first made unofficially, but now it can be bought on Steam, recognized by Valve officially.

Not as powerful as Minecraft at brick-based building, Garry’s Mod is strong at creating secondary games. With it you can make a zombie apocalypse story, a shooter, a detective story, various physical and sports games, and so on. More than a sandbox, it’s an engine over an engine. Besides that, it looks much better than what Roblox offers, though it means higher system requirements.

It’s an online engine for creating multiplayer games like Roblox, with its both social and graphical tools. So far it has thousands of games created by its users, featured on the official site and fun to play.

Creativity starts when you register and create your avatar. The avatar master on KoGaMa introduces you to the basics of design, then telling you more. As cubic as in Minecraft, later it lets you shape objects with built-in tools. Step by step you can learn physics, visuals, design, and so on.

And yes, one can both spend and earn on KoGaMa. It doesn’t take an app for PC: a web interface is here. On the other hand, there is no version for iOS, but it works fine in Safari.

It’s rather a Minecraft follower, letting you create your own cities and rule their lives, establish rules, control the citizens, and define the atmosphere: whether it will be law-abiding or criminal, positive or fearful. It also supports multiplayer, letting you play your stories with other players online.

As the name suggests, your main tool is a “voxel” – a 3D pixel, similar to the cubes you use in Minecraft. You can build your city using premade templates, or from scratch. Then there are many careers, from criminal to revolutionary, awaiting right around the corner you have built with your own hands and keys.

It’s a poor replacement to Roblox because it lacks its ability to create your own games. Yet Voxel Turf is a great building game, combined with strategy elements, and thus it deserves a closer look. So if you’re searching for a place to apply your creativity, rather than a Roblox clone, you may find Voxel Turf quite an option.

As we see, Roblox, with all its pros, isn’t that one of a kind. There are analogs, providing you the same levels of freedom, letting you design your own games and earn money on them, or just upgrade your design skills. So if you want to evolve, but need a fun learning tool for design, these Roblox analogs are worth a try.

Mary Vaughn 21 Apr 2021 Before I Forget Comes to Xbox and Switch on April 29 The debut title by 3-Fold Games, exploring the life of a dementia patient, is coming to consoles thi...

Silver Holman 13 Apr 2021 Three New Games Available on Epic Store for Free During the lockdown times, we have got used to weekly freebies on Epic Store. But while usually it&r...

Bruce Hanson 08 Apr 2021 The First Patch for Outsiders to Nerf the Trickster… and More Outriders is one of the most spectacular games released this April, and it didn&rsquo;t take long fo...
Popular Games

Rhythm Doctor Indie
We use unpersonalized cookies to keep our site working and collect statistics for marketing purposes. Learn more